A downloadable game for Windows

WARNING! THIS IS A FIRST-RELEASE OF THE GAME AND IT HAS NOT BEEN POLISHED UP. THIS RELEASE WAS PREPARED IN 2 WEEKS SPECIFICALLY FOR THE PRIDE GAME JAM. THERE MAY BE BUGS, BALANCING ISSUES, AND IT MAY LOOK A BIT UGLY. EXPECT UPDATES IN THE FUTURE.

Our excuse for the vast majority of things that aren't here or are bad will have to be that we didn't have time. Allow us to fix these in the future...

"Gensokyo had been overtaken by an uncomfortable peace. In fact, it was less of a peace than it was an absolute silence.

How long has it been since there's been any real excitement? They say that hardly anyone comes into the bookshop anymore...

Those were the rumors stirring in the village. In truth, it seemed that the youkai and gods of Gensokyo had lost any sort of "passion"-- their drive, their joviality, their petty squabbles, and most of all, their interest in humanity. This was a cause for concern.

If youkai and gods simply went without interacting with humans in any capacity, then sooner or later, their very existence would be threatened. And after all, Gensokyo was constructed for their preservation.

And yet, in the midst of this, there were still reports of fairies that maintained constant uproar. Of course, this drew suspicion.

Luckily, there were those who held passions so burning that somehow, they went entirely unaffected. Sensing something wrong, they went into action."

Ecstatic and Expressive Allies is a short, one-stage shoot-em-up that is a Touhou Project derivative work. In it, pick between four difficulties and two teams and battle against a new and original character based on Roman mythology, with original danmaku patterns.

Play as Reimu and Marisa, the lovely Forward-Focused Adoration Type, or play as Yuyuko and Yukari, the cunning Any Way Wide Type.

Touhou Project original concept, characters, and other elements are the property of ZUN and Team Shanghai Alice. This game is only a fanmade work and is not affiliated with or endorsed by the original creators. Please support the official series.

People in Bullet Hell Engines - Being So Helpful

There is some stuff planned for after the game jam:

-A new player team. You wont believe who it is...

-A stage section with a cool song by frogmask

-Some nice and cute endings by frogmask

-All player sprites by Luminous

Wait, is there supposed to actually be an ending or was that a joke? On mine the boss just dies and the level goes on forever.

After beating the boss we just kept endlessly flying with nothing happening. 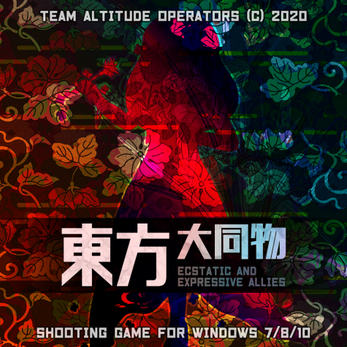